2 Comments
By jenkay3901 Preparing for the trip

Some people prepare for the road with snacks.  Sure, we’ve got some nuts and some peanut M&Ms (cause Pam told me to). And I’m certain at some point we’ll have some type of dried meat stick; you cannot put Paul in a car for 28 hours and expect him not to eat jerky.  Oddly enough, before this trip, we canned a whole bunch of things.  Maybe it’s because we think we’ll have to survive, Man vs. Wild-style in the event somewhere past West Memphis we realize that  the Check Engine Light isn’t lying. When you have canned goods, you can survive all kinds of things…zombie attack, nuclear winter, time with the in-laws.  It’s that 3rd scenario we’re more likely concerned with.  And how is Paul surving the in-laws, I mean the most super-awesome family happy fun-time ever?!  With cranberry preserves, pickled peppers, and a homemade concoction, not concocted in the bathtub, but homemade nevertheless, called Boozy Goodness. Because really, peppers, cranberries, and cinnamon kahula go together, right? Don’t lie, you wish you had some right now, don’t you? 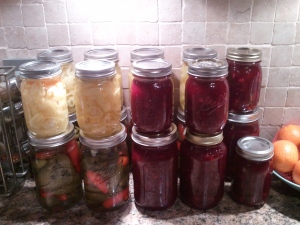 And really, what survives better in the wild and is more durable than glass jars?

We’ll have vegetables with the banana and jalapeno peppers, fruit/carbs from the cranberry preserves (both should prevent scurvy). If we got too hot, breaking out a sweat from the shelter we’d have to build, because that’s the first thing Bear says to do when you’re out in the wild, we could drink the pickle juice from the peppers; it’s what former Tennessee Vol and current Cowboy Jason Witten recommends during training camp to keep the electrolytes balanced.  Then there’s also the protien we’ll have from the nuts and the peanut M&Ms (dairy from the milk chocolate in the peanut M&Ms.  So far so good.  It’s unfortunate that we put the deer wistles on the car…otherwise we might have had us some deer to eat too. I suppose we’ll have to ration Paul’s Slim Jim.  (Paul’s Slim Jim won’t make it from the gas station to inside of the car.  He steps into Slim Jims rather quickly.)

After a well-balanced meal, we’ll retire for the evening with a night cap of Boozy Goodness.

Good thing we have extra pies to throw in the faces of the zombies we’ll encounter.  We just better hope that the zombies aren’t lactose-intolerant.  Heck, I even have a special pie for the celiac zombies. 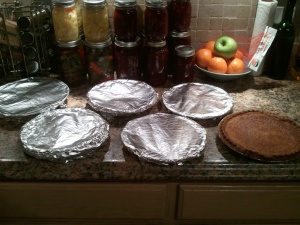 Showing the zombies a little Southern hospitality before the double-tap.